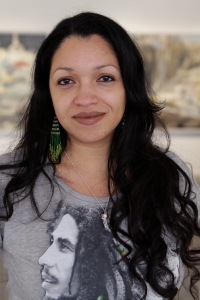 Brooklyn-born and raised Puerto Rican artist Yasmin Hernandez’ work is rooted in struggles for personal, political and spiritual liberation. Her on-going project Bieké: Tierra de valientes combines oral history, painting, installation and video to explore the struggle for peace and justice in Vieques after decades of US Navy bombing maneuvers. Her 2011 mural Soldaderas, honors the work of painter Frida Kahlo and poet Julia de Burgos, inspiring continued solidarity between the neighboring Mexican and Puerto Rican communities in East Harlem and beyond. The artist was invited to participate in another East Harlem-based project, Mi Querido Barrio. Organized by the Caribbean Cultural Center, the project utilizes augmented reality technologies to reenvision the historic and cultural significance of the community. Recent projects draw more from the artist’s personal experiences to connect to the greater human struggle for survival and liberation. Luz explores the cycle of life and death in tribute to her brother who passed from cancer in 2010. Linea Negra, inspired by the midwife-assisted home births of her two sons, considers the spiritual and transcendent experience of birthing when driven by the innate wisdom of women’s bodies and a universal feminine spirit. Most recently these two projects have fused into a new concept called Fluido where the artist channels her family’s own espiritismo tradition. Fluido is a reference to the universal fluid or life force of which all living things and natural forces are comprised, and informs the formal principles of the works. Yasmin has received various recognitions for her commitment to community building through the arts. She was selected as an honoree in El Museo del Barrio’s 2014 Three Kings Day Celebration. Other recognitions include an Artist/ Activist of the Year award in 2006 from the NYC-based organization Art for Change, the Ramón Feliciano Social Justice Prize from the Center for Puerto Rican Studies at Hunter College CUNY and a Mujeres Destacadas/ Outstanding Latinas Award by New York-based Spanish-language newspaper, El Diario/ La Prensa. Yasmin attended the LaGuardia High School of the Arts in Manhattan and holds a BFA in Painting from Cornell University. Her painting series, Realidades de Quisqueya, created with a grant from the Cornell Council for the Arts, has been on permanent exhibit at the Cornell Latino Studies Program Offices since 1997. In 2008 she was commissioned to paint a tribute to revolutionary leaders of women and LGBT communities for the Edmonia Lewis Center for Women and Transgender People at Oberlin College in Ohio, and a five-panel painting series documenting 40 years of student activism for the Intercultural Resource Center at Columbia University. Yasmin has developed community education initiatives on themes of art and liberation and has worked as an educator with the Studio Museum in Harlem, El Museo del Barrio in New York City and Taller Puertorriqueño, Inc. in Philadelphia, among other arts and cultural institutions. She continues to exhibit and present her work on campuses, arts institutions and community organizations in the United States and in Puerto Rico. Her works can be seen alongside personal testimonials and historical narratives on her website http://www.yasminhernandez.com.