History In Da Key Of G

Building a “Recovery for All of us”, is the intention of this transformative, intergenerational, collaborative engagement called “History In Da Key Of G”. Led by stage actress Cniambi Steele, this creative workshop, will equip participants with simple tools with which to empower themselves. Participants are encouraged to delve into their personal universe of the family, uncovering treasured memories. Participants utilize data they cull from history geography, and personal P.O.V. Music in a lively experience. 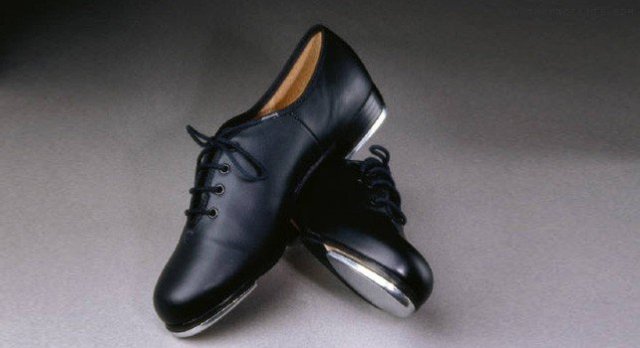 Workshop leaders Megan Haungs and Toes Tiranoff combine elements of jazz tap percussion, swing dance, vaudeville, comedy, and puppets in their shows. They have performed at LaMaMa E.T.C., Town Hall, NYU, Lincoln Center’s Damrosch Park, Dixon Place and Bryant Park’s Piano in the Park. While touring the Pacific Northwest they performed in theaters and community centers and led dance workshops in Washington State, Oregon and Idaho. They were long time students of Chuck Green, the “Godfather of Tap” and were mentored by Buster Brown, who performed with Duke Ellington. Megan was a member of Frankie Manning’s “Wednesday Night Hoppers” and performed at the Museum of Natural History and the Museum of the City of New York. Toes was a member of Mama Lu Parks Jazz Dance Theater Company and tap danced at Carnegie Hall.

Artist Gabriel Rodriguez will be offering natural dye workshops on Governors Island at The West Harlem Art Fund building situated in Nolan Park (Building 10B). The workshops will be open to the general public, no experience necessary. During the workshops participants will learn the basic techniques, materials, and processes of natural dyeing. They will each dye and leave with an organic cotton mesh shopping bag that will be provided to them. Alongside learning about the craft of natural dyeing I will impart the ethics, impacts, and philosophies of natural dyeing by touching upon subjects of sustainability, circularity, environmental consciousness, and material origins. The workshop will also take advantage of its location at Governors Island by getting to know the various dye plants that are being grown at Nolan Park.

This FREE workshop is a great opportunity for NYC residents from different boroughs to gather and view the NYC environment as a shared place to care for. As we’ve become more aware of the growing strain on the environment we live in, my intention with the workshop is to not only share the pleasure of natural dyeing but also focus on the positive ecological impact we can make with our choices as citizens of this magnificent city. Offering this workshop at Nolan Park provides a Covid-19 safe environment with the ability to work outside in the open air. All materials will be included for the workshops. Some light snacks and refreshments will be provided.”

West Harlem Art Fund is pleased to present Elements, an exhibition that features up and coming artists in September to the public in the historic district of Nolan Park (Building 10B) on Governors Island.

Drawing inspiration from the Native American proverb, We don’t inherit the earth from our ancestors, we borrow it from our children, curator Savona Bailey-McClain, carefully selected artists for this show with a light touch. Nature is blended throughout the entire exhibition with paintings, digital mapping, sound, sculpture and design.

Hours are 12 pm — 4 pm by appointment only per Mayoral Executive Order. Please email westharlemartfund12@gmail.com to schedule time and share proof of vaccination.

This August, West Harlem Art Fund, Visual Muze Storytelling Residency and Katharine Pettit Creative present Uptown Pops — a dance series that will be performed in Nolan Park and Castle Williams on Governors Island. The works-in-progress are a part of a new interactive initiative designed to engage public audiences as they respond to developing dance.

Performance dates are August 15th and 22nd in Nolan Park with a special performance in Castle Williams on August 29th. Island visitors can see the works at 1 pm and 4 pm.

Funding for UNTITLED GIRL NARRATIVE was made possible by a grant from City Artist Corps. Special thanks to National Park Service for permission of Castle Williams.

The West Harlem Art Fund is starting a FREE membership club for new collectors. Meet artists and talk with them about their practice. Sign up for gallery tours and art fairs. Meet art dealers, develop your own collecting style. Share your finds with other collectors in a relaxed environment.

Come on Governors Island to our exhibition space in Nolan Park, Building 10B (NP/10). Enjoy light salads. Hang out in our backyard, view sculptures or sit on our porch.

We hope to see you there! 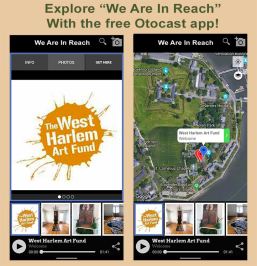 Enjoy our audio We Are In Reach where you hear from the artists directly. Download the FREE app Otocast. It’s best to hear it on the island but you can hear it from afar. Many thanks to Eric and Otocast. 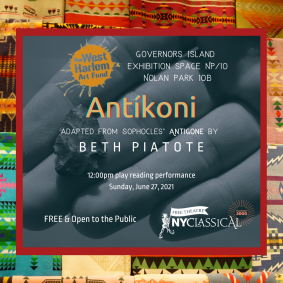 New York Classical Theatre in partnership with the West Harlem Art Fund presents a dramatic reading of Antíkoni adapted from Sophocles’ Antigone by Beth Piatote, directed by Jen Olivares at 12:00pm on Sunday, June 27, 2021.
https://nyclassical.org/antikoni
https://ci.ovationtix.com/35099/performance/10736989?performanceId=10736989
In Antíkoni, Beth Piatote’s retelling of the Greek tragedy, Antigone, a Native American family is torn apart over the fate of ancestral remains held by a museum. As Kreon, the museum director, and Antíkoni, his fierce opponent, argue over the terms of repatriation, a chorus of Aunties comments on the conflict through mythic storytelling and gossip. Set in a museum and exploring contemporary struggles over human remains, the play sheds new light on the questions posed by the original: What do the living owe the dead? What are the limits of human laws in the face of eternal values? And what is the price of sacrifice?

Memory Opus I is a sound work derived from COVID Diaries POC, an ongoing oral history project conceived by the West Harlem Art Fund and artist Nadia DeLane. Capturing the voices of people of color in quarantine, Memory Opus is a collection of poignant interviews touching on events surrounding the pandemic, identity and global calls for social justice. Music is by Caleigh Drane.

CURRENT UNDERCURRENT is a visual conversation relating to current events such as COVID-19, gender (LGBTQIA+, masculinity) racial justice (Black Lives Matter), and climate change. The show addresses these issues through the shared anxiety of a divided nation and a partisan political climate. There are no clean divisions in these issues. COVID-19 and climate change have more devastating effects on Black and brown people. A California wildfire began with a gender reveal party’s pyrotechnics. Toxic masculinity has fed the anti-masker movement. The boundaries are permeable and the issues intersect and overlap.

This virtual discussion will spotlight the talents of seven mixed-race artists who lived and studied in either the United States or Europe. Panelists will discuss what influenced these people to become artists and what their impact on world politics entailed.

Rice around the world is thought of as Asian. But rice is just as African as it is Asian. Oryza glaberrima was cultivated from wild rice that needed humans when the Sahara was drying. That knowledge fueled the Trans Atlantic Slave Trade where Africans were brought west.

Rice dominated the United States and particularly South Carolina for two hundred years by these African slaves. When Black culture migrated north, Harlem became its capital. A mecca where traditions could be preserved and human rights championed.

Spend an evening learning about rice with curator and historian Savona Bailey-McClain, culinary historian & author Michael Twitty, JJ Johnson, chef of the rice restaurant FieldTrip, and rice farmer Nfamara Badjie. Learn how the culture of rice has impacted Black culture as we trace its roots from Africa and the Caribbean to the American South.

Gullah food is one of the oldest world traditions being practiced in America today. It is about ancestral ties and American living, adaptability, and creativity.

The year 2020 is very special. Four American centennials are being celebrated across the country. Yet there’s another centennial that is not American but has impacted this nation deeply. In 1920, the Mexican Revolution ended. The government was trying to figure out how best to unify the country after the war. What was decided — bring back an art tradition that dates before Columbus and for which the people loved. Murals have depicted everything from historical events such as wars to religious ceremonies like human sacrifices.

During the Depression, the Roosevelt Administration created the WPA and the Federal Arts Project to also unify this country. Our government wanted to show how it could positively impact our population and get them back to work.

This talk will elaborate on this special time at the Throckmorton Fine Arts Gallery in midtown and moderated by Savona Bailey-McClain, Executive Director & Chief Curator, West Harlem Art Fund. 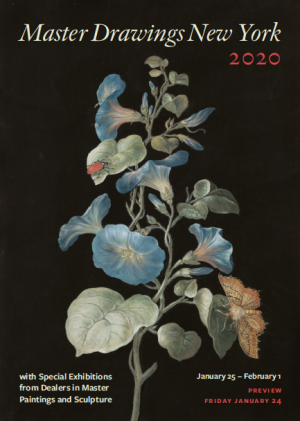 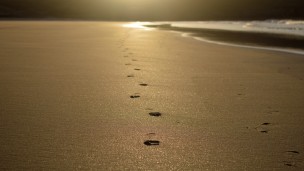 The West Harlem Art Fund is pleased to present Crossing the Sands, a contemporary art exhibition with artists representing the Caribbean, Africa, and the Americas. Located in the historic district of Nolan Park on Governors Island, visitors will have the opportunity to enjoy both works of art and the venue which is an old military home completed in 1878. 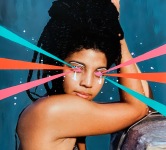 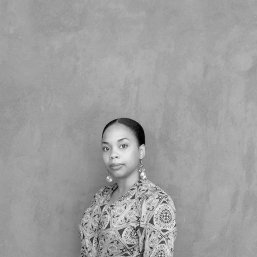 Nadia DeLane is a multimedia designer and visual storyteller working in installation, film, digital and fine art. DeLane has produced creative content for organizations and institutions including the School of Visual Arts, Parsons School of Design, Stone Lantern Films and Turnstone Productions.  She has consulted on several award-winning animated films and documentaries and her work has been featured in online publications such as AI-AP’s Design Arts Daily (DART).

UTICA is an original film about thought. A community is in turmoil as its members sort through telepathic messages. A self-hating telepath must decide whether he will protect the public or safeguard his own mind.

“Three Skeleton Key” is a short story by the French author Georges-Gustave Toudouze. The January 1937 edition of Esquire marked its first appearance in English. This suspenseful tale and “Leiningen Versus the Ants” were discovered by the magazine’s editor Arnold Gingrich.

Georges-G. Toudouze (1877-1972) was born in Paris, France. His father, Gustave Toudouze, was a well-known author of the time. The younger Toudouze wrote on such topics as art, architecture, travel and French naval history. Although he penned numerous adventure novels and short stories, he is today remembered for a single work: “Three Skeleton Key.”

One thought on “Special Events”