Photos taken by Will Vaultz

Projecting computer-generated visuals onto a 104 feet long and 16 feet tall white wall that responds to the sound of cars passing by and to motions created by audience members, river|road is a truly interactive experience that lets visitors observe and contemplate the close connection of the city to the river. The project has been conceptualized and created by CultureHub’s Artistic Director Billy Clark and Technical Director Jesse Ricke.

“The river|road project uses technology to create stunning visual effects that can be manipulated by sound and movement integrating the environment around the river and engaging audience members,“ states Clark. “We will create 48 light bands that will fragment and reveal the texture of the 104 feet long wall. When cars drive by, the sound of the passing cars will disrupt our computer generated visuals, producing a dynamic pattern of light on the wall.”

A special highlight and the culmination of the project will occur when audience members clear accumulated computer generated data with their movement, revealing a poem by Rita Dove, United States Poet Laureate and Pulitzer Prize Winner for Poetry, entitled Under the Viaduct, 1932, and adding a textual layer to the light projection.

river|road is a free event presented by CultureHub in association with The West Harlem Art Fund, Savona Bailey-McClain, Executive Director and Chief Curator, a seventeen year old public art organization and curatorial collective serving neighborhoods around the city. Funded by CCNY City Lights SPIE Chapter, The West Harlem Arts Fund and the National Endowment for the Arts, the art project was apart of the UN International Year of Light. 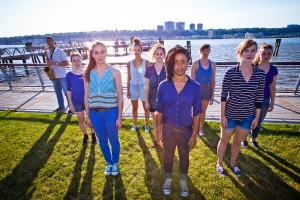 Choreography by Louise Eberle
Photos taken by Will Vaultz

Choreographed by Louise Eberle for Under the Viaduct 2015, an art & lifestyle series where folks can meet, bike, skate or dine in an open-air plaza. Situated in West Harlem on 12th Avenue and near the Hudson River, residents and fellow New Yorkers enjoyed passive recreation in the daytime and when the sun went down, engaged in a sunset dance intervention, digital and reflective art.

The premiere of Shoreline was based on movement themes of “ebbing and flowing”. Dancers clustered onto the grassy lawn between the two piers on the shore. Once assembled, the dancers progressed to a canon of set material, which evolved into a mass of bodies, again moving with “ebbing and flowing” ideas, ending as the dancers move in a flock-like fashion off down the path, indicating the end of the piece. 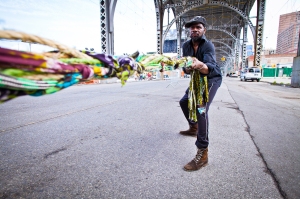 The artist as cultural worker, uses their work to create aesthetic interventions, thus causing us to think and/or imagine worlds and ideas beyond our own. The push-pull or Tug-of-War if you will is to shake the larger society out of its hypnotic state.  Certainly I am no different, our charge as truth tellers is to challenge the status quo. We are not limited to white box spaces, and thrive on having our voices heard in the streets. The mere act of making art is disruptive and revolutionary. As such, the artist as cultural worker often finds themselves at once the protagonist and that of antagonist. We create work in order to liberate consciousness thus confront sociopolitical and socioeconomic issues, as well as, injustices of all sorts. The beauty and splendor of a work may at times trick us into engaging with things that may otherwise escape our attention. However, allowing ourselves to see and create meaning can take us on unimagined journeys. Art is the epoxy that holds a culture together, as such the artist as cultural worker understands his or her place in society, as well as community. We are charged with the strengthening and building of both. This charge does not come without trepidation for all parties, but the artist as cultural worker is unwavering in their efforts for truth, justice and equality. We understand that these efforts will always produce a Tug-of War. 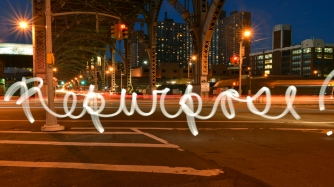 Lighting Demonstration & projection on May 10, 2014 Vicki DaSilva is a light graffiti and painting pioneer. Since 1980, she has been making single frame time exposure photographs, at night. Vicki is credited with the term “light graffiti” as well as being the first artist to make deliberate text light graffiti photographs. Vicki was influenced by video and performance artist Joan Jonas and then Richard Serra whom she worked with for ten years. Her work with Jonas and Serra, along with the birth of Hip Hop and the fusion of graffiti with fine art was extremely influential in her art. Vicki, along with her husband Antonio, use 4 and 8-foot fluorescent bulbs attached to a complex system of tracks and pulleys to create her work. Using a camera that allows a ‘bulb’ setting for an extended time while on a tripod, the light source is directed at the camera and then the camera documents the movement of the light. North Rivers Arts is a public art initiative for the communities of West Harlem, Washington Heights and Inwood. Communities along the Hudson River, want to enhance their open public spaces and attract artist locally, regionally and beyond. Northern Manhattan neighborhoods understand the benefits of the “arts” and that it can improve quality of life, local tourism, safety as well as bring beautification.

Under the Viaduct is the 2nd installment of light interventions in West Harlem. A public art initiative spearheaded by the West Harlem Art Fund for the communities of West Harlem, Washington Heights and Inwood. Communities along the Hudson River, want to enhance their open public spaces and attract artist locally, regionally and beyond. Northern Manhattan neighborhoods understand the benefits of the “arts” and that it can improve quality of life, local tourism, safety as well as beautification. 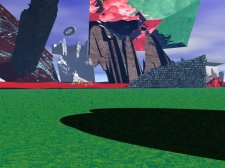