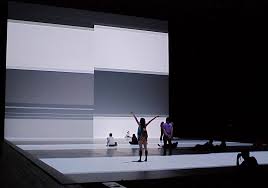 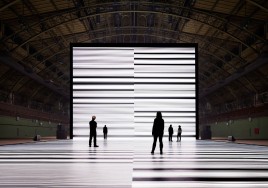 The West Harlem Art Fund will extend Under the Viaduct a little north to the borders of West Harlem & Washington Heights. The organization will partner with CultureHub to bring data visualization uptown. Below is a commentary and a video that showcase Japanese artist Ryoji Ikeda. The goal is to inspire and encourage local residents and fellow New Yorkers to the possibilities of digital art in open, public spaces. This work was shown at the Park Avenue Armory. We wish to thank our sponsor West Harlem Development Corporation who will fund our new work uptown.

In “The Transfinite,” Japanese artist and composer Ryoji Ikeda utilizes the digital building block of binary codes to display human’s captivation and bewilderment with technology. Filling the massive 55,000-square-foot exhibition hall with his video and sound installations, Ikeda created an immersive audio-visual environment at the Park Avenue Armory in New York’s Upper East Side. As one walks into the hall they encounter a 45-foot-tall, 60-foot-wide vertical screen, where Ikeda has projected barcode-like black-and-white lines, which pulse to an audio component that is being dictated by binary codes (programmed by the artist). The other side, also a screen, displays the inner workings of the installation, showing digital renderings of both the binary codes and the programming used to create the light projections on the opposite screen. Many viewers were awestricken by the work, approaching and examining the hypnotizing light and sound patterns, as though encountering something from a foreign universe.

Ikeda incorporates binaries in all aspects of the exhibition, from the codes that control the flow of the barcode lines and audio to the displays on the screens, which split into white and black sides—simultaneously showing different segments—during one projection sequence. The bisection continues onto the white floor, which becomes halved by the two different projections. These patterns in the display create vibrant variations and rhythm in the exhibition.

The synced visual and aural displays of the binary codes in the transfinite (2011) are reminiscent of early television airwaves (and the buzzing noise generated when its scheduled programming ended late at night), combat radio signals with fuzzy reception, and even audio transmissions sent out by space stations in search of alien contact. Techno beats can be heard within the soundtrack, which is accompanied by vibrating black-and-white lines on the screen. The projection sequence also includes meditative segments, with sounds evocative of vibrations from a singing prayer bowl, and images of lines reverberating like waves on the screen, enticing many viewers to experience the installation while sitting in the lotus or vinyasaposition. Visitors lounged upon the floor in front of the large screen as if relaxing in A Sunday Afternoon on the Island of La Grande Jatte (1884) by Georges Seurat. Media’s multifaceted role in communication comes forth in the various patterns and rhythm of Ikeda’s installation.

The contemplative front side is juxtaposed with a darker side in the back, which consists of a black floor with nine, smaller monitor stations lined in single file leading up to the front of the 45-foot-tall screen. This side displays the binary code that dictate the movement and shape of the black-and-white bars that appear on the front screen, as well as that of other digital components of the installation, and various visual interpretations of the code are simultaneously displayed on each of the nine monitors. The digital renderings create a hypnotizing vision that viewers gaze upon in bewilderment, as they attempt to unravel the enigmatic code. In the transfinite, Ikeda creates a digital spectacle that explores human’s fascination and interaction with technology.