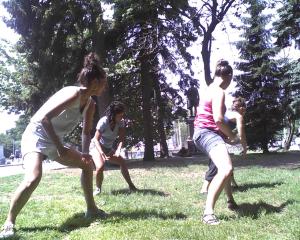 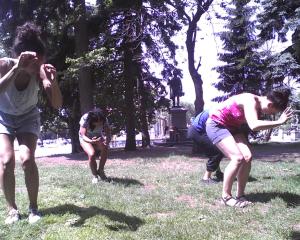 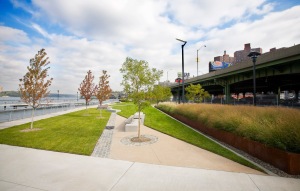 Choreographed by Louise Ebersole for Under the Viaduct 2015, an art & lifestyle series where folks can meet, bike, skate or dine in an open-air plaza. Situated in West Harlem on 12th Avenue and near the Hudson River, residents and fellow New Yorkers can enjoy passive recreation in the daytime and when the sun starts going down, engage in dance, digital and reflective art.

The premiere of Shoreline is based on movement themes of “ebbing and flowing”. Dancers will cluster onto the grassy lawn between the two piers on the shore. Once assembled, the dancers will progress to a canon of set material, which will evolve into a mass of bodies, again moving with “ebbing and flowing” ideas, ending as the dancers move in a flock-like fashion off down the path, indicating the end of the piece. 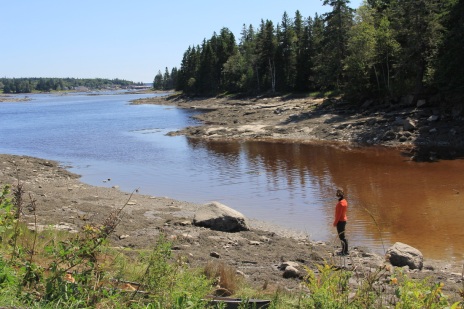 A durational performance with the sea

36.5 is a series of durational performances lasting 12+ hours for a full tidal cycle, low-tide to low-tide.

New York-based artist Sarah Cameron Sunde stands in a tidal bay as the water engulfs her up to her neck and then recedes again. The tide tracks time directly on the body and functions as a metaphor for accelerated change. Each performance involves new participants and the piece grows organically.

Inspired by the 10.5 foot tidal shift on the coast of Maine, contemporary daily routines, the work of Knut Hamsun, Marina Abramović and leading climate adaptation experts, this time-based project acknowledges the permanently temporary nature of things and considers our relationship to water as it shifts due to rising sea levels and the struggle to survive both as individuals and as a civilization.

“Shuffled Light” first premiered in January at the Opening Ceremony for the UN International Year of Light at the Brooklyn Navy Yard. Created by Pete Rogina and Eileen Cohen, this team used Panasonic PTD5700U projectors that were graciously donated by Video Corporation of America based in Somerset, New Jersey.

Cohen artfully executed the video animation; create moving and interacting layers of the light images many of which have starkly beautiful and vivid colors dancing in layers. To add an aquatic element to the mix, a series of colorful ink drops were shot.

The pieces all start as eight light photos or videos shot by Rogina and are then taken by Cohen into Photoshop, Final Cut Pro and After Effects for image preparation, animation, layering and “joining” together. Original images are captured with a Canon 5D Mark II camera using mostly a 24-105mm professional lens. All video is shot in 1080p and the final pieces are rendered at 1080p, 720p, and VGA.

For the second year, this team will be projecting on the famed Cotton Club located on west 125th Street near 12th Avenue. We would like to thank the owner, Mr. John Beatty for his invaluable support.