Tilton Gallery presents Derrick Adams’ newest body of work, Figures in the Urban Landscape  through January 6th, 2018. It will be his fourth solo show with the gallery. A reception for the artist will be held Wednesday, November 8th from 6 to 8pm. Derrick Adams is a New York–based, multidisciplinary artist, working in performance, video, sound, paint, textile- and paper-based collage, and multimedia sculpture. His practice is rooted in deconstructivist philosophies such as the fragmentation and manipulation of structure and surface, and the marriage of complex and improbable forms. Through these techniques, Adams examines the forces of popular culture and the media and their effects on the perception and construction of self-image.

As a natural evolution of Adams’ Deconstruction Worker series, this latest iteration of mixed media works on paper and wood panel employ acrylic paint, ink, pencil, fabric and model cars to create faceted figures that now move further in the direction of more fully-formed figures, asserting his position on the subjects of portraiture and identity. Within some of the portraits there are roads, providing equal presence to the figure and landscape, each with their own level of entry and dimensionality. 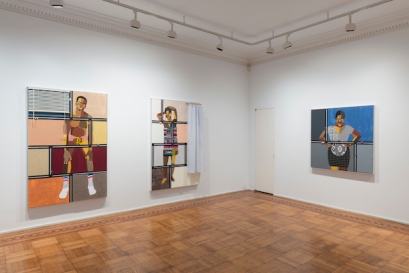 The roads are topographical and the figures can be seen as either looking into or out from the grid pattern, as one would look inside or outside of a window. With these works, the figure and the landscape are reflective of each other, posing questions, such as, “Where am I? Where does this road lead?” Offering answers, “I am central to the narrative. I constructed the environment around me.” The cars affixed to the road emphasize the surface and composition, offering movement, direction and navigation. The plaid textiles within the work are in conversation with the grid, drawing attention to our influence upon the landscape, or conversely, how it informs us and our decision-making. The plaids serve to illustrate how we occupy and pass through spaces and, consciously or unconsciously, compliment the grid. Placed within the Western influenced plaid patterns are African-inspired printed fabrics. These inset circles illustrate the additional dimension of the black American narrative and serve as an expression of African lineage. As with previous works related to this series, Adams’ new work has many precedents in earlier Modern and Contemporary art. Formal spacial constructs and his clear, bright use of color hark back to the early 20th century as well as to mid-century Pop art, while his approach to collage and breakdown of the figure acknowledge earlier figurative artists such as Romare Bearden. Architectural processes and their different presentation strategies also play an important role in the work: footprints, floor plans, elevation sections, visual renderings and the constructed object act as various developmental states and approaches and serve as a comparative investigation into the physical construction of the figure. The final images, surprisingly simple and even playful at first glance, present vibrant new interpretations of portraiture. Completely contemporary, Adams’ figures each have strong individual personalities that relate to the viewer as well as their environment and historical precedents.

Adams received his MFA from Columbia University, BFA from Pratt Institute, and is an alumni of the Skowhegan School of Painting and Sculpture, and the Sharpe-Walentas Studio Program. He has been the recipient of the Joyce Alexander Wein Artist Prize, Louis Comfort Tiffany Award, S.J. Weiler Award, and Agnes Martin Fellowship. He has exhibited and performed at MoMA PS1, Brooklyn Museum of Art, PERFORMA, Studio Museum in Harlem, Brooklyn Academy of Music, The California African American Museum and The Metropolitan Museum of Art, among other notable galleries and institutions. Adams’ work is in the permanent collections of the Studio Museum in Harlem, Virginia Museum of Fine Arts, Birmingham Museum, and the Metropolitan Museum of Art, New York. Adams had a solo show at The California African American Museum, Los Angeles earlier this year and will be included in the upcoming Prospect.4, New Orleans. Patrick Kelly, The Journey, a current solo show of Adams’ work, is on exhibit at the Countee Cullen Library, New York, organized by the Studio Museum in Harlem, and he will have a one person exhibition at the Museum of Art and Design, New York opening this January, 2018. Adams lives and works in Brooklyn, NY.