To learn even more, you can now sign up as a member and get special videos, information and invitations to special events.

Tap dance is an indigenous American dance genre that evolved over a period of some three hundred years. Initially a fusion of British and West African musical and step-dance traditions in America, tap emerged in the southern United States in the 1700s. The Irish jig (a musical and dance form) and West African gioube (sacred and secular stepping dances) mutated into the American jig and juba. These in turn became juxtaposed and fused into a form of dancing called “jigging” which, in the 1800s, was taken up by white and black minstrel-show dancers who developed tap into a popular nineteenth-century stage entertainment.

Early styles of tapping utilized hard-soled shoes, clogs, or hobnailed boots. It was not until the early decades of the twentieth century that metal plates (or taps) appeared on shoes of dancers on the Broadway musical stage. It was around that time that jazz tap dance developed as a musical form parallel to jazz music, sharing rhythmic motifs, polyrhythm, multiple meters, elements of swing, and structured improvisation.

The oral traditions and expressive cultures of the West Africans and Irish that converged and collided in America can best be heard. The flowing 6/8 meter of the Irish Jig that was played on the fiddle or fife (a small flute), can be distinguished from the polyrhythm of West African drumming, with its propulsive or swinging quality. The fusion of these in America produced black and fiddlers who “ragged” or syncopated jig tunes. Similarly, the African-American style of dance that angled and relaxed the torso, centered movement in the hips, and favored flat-footed gliding, dragging, and shuffling steps, melded with the Irish-American style of dance that stiffened the torso, minimalized hip motion, and emphasized dexterous footwork that favored bounding, hopping, and shuffling (Kealiinohomoku 1976). 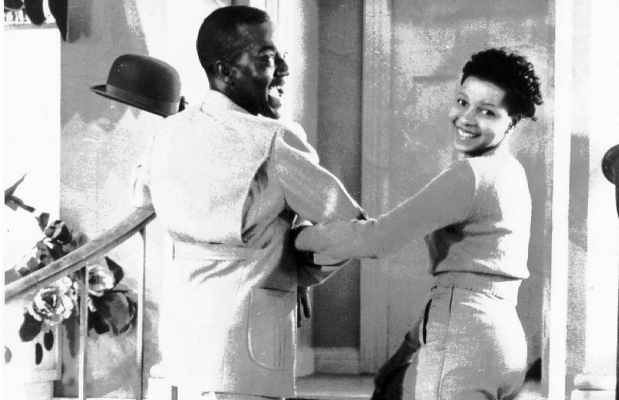 “Baby Edwards” Hunt was a child star who in the 1940s partnered with Willie “Span” Joseph to form “Spic and Span.” She was the first black dancer to perform on the all-white “Horn and Hardart Kiddie Hour” radio show. She went on to work at the Apollo alongside Lena Horne, Duke Ellington, among others.

Ludie Jones. She was a member of the Lang Sisters, and danced with Louis Armstrong and Fats Waller in New York in the 1930s. After the group ended, Jones formed her own, The Three Poms, which opened for Cab Calloway and traveled with his band. They also performed for soldiers during World War II.

Edwina “Salt” Evelyn. She learned how to tap on the streets, which she preferred to attending dance school. She performed with Jewel “Pepper” Welch as Salt and Pepper in theater, night clubs and on USO tours.

Jeni LeGon. She danced not in skirts and high heels, but in pants and low heels. She was known for her toe stands. She danced in the chorus line of the Count Basie Orchestra, toured with the Whitman Sisters and performed with Bill Robinson in the 1935 musical “Hooray for Love.” She later worked with Fats Waller and appeared in several black films – sometimes as herself, she said, and not as a maid. Lois Bright Miller. She was part of the Miller Brothers and Lois (George, Danny and Lois Bright) team. She was a teen performer with the Whitman Sisters, joining LeGon and Catherine Basie as the Snakehip Queens. They performed in the 1947 movie “Hi-De-Ho” with Cab Calloway.

Cholly Atkins talked about the difficulty in trying to persuade the Miller Brothers to include Bright, a quick leaner and excellent hoofer, in their act. After Danny finally agreed to see a preview, he was convinced. “You see the only reason he hesitated in the beginning was because she was a woman. … She was just the wrong sex as far as he was concerned,” Atkins said in the 2001 book “Class Act: The Jazz Life of Choreographer Cholly Atkins.”

Cora LaRedd. The rhythmic brilliance, athleticism, and open sexuality of Cora LaRedd’s dancing made her, not only the most noted female soloist at the Cotton Club in the 1920s and 1930s, but also the most extraordinary jazz tap dancer in those decades. Recognized as a brilliant Harlem singer and dancer when she became the lead performer for arranger and bandleader Charlie Dixon (of the Fletcher Henderson band), La Redd received her first Broadway notices in the musical comedy Say When  (1928), in which she was singled out as “a sepia-tinted Zora O’Neal who combined limber-legged dancing with wah-wah singing.” Broadway saw much of LaRedd in the late 1920s. The “all-colored musical novelty,” Messin’ Around (1929) with music by James P. Johnson, lyrics by Perry Bradford, and dances by Eddie Rector, featured LaRedd in “Tapcopation,” “Put Your Mind Right On It,” and a Waltz Clog specialty with Charles Johnson.   In the all-black musical comedy Change Your Luck (1930), with music and lyrics by J.C. Johnson and dances by Laurence Deas and Speedy Smith, LaRedd excelled in “Can’t Be Bothered Now,” “My Regular Man,” and “Percolatin.”  Audiences were dazzled by LaRedd at the Cotton Club, where she was regularly featured as the leading song-and-dance diva. In the Fall 1930 Cotton Club revue “Brown Sugar (Sweet But Unrefined),” LaRedd was a featured soloist on the bill with Wells, Mordecai and Taylor in “Hittin’ the Bottle.”

The best example of LaRedd’s dancing may be seen in the twelve-minute black-and-white musical short That’s the Spirit (1933), regarded as one of the greatest all-black jazz shorts ever made. In it, LaRedd sings and dances. Small and compact, the dark-skinned dancer shows a fiery vitality.  Wearing a white satin blouse with full-blown sleeves and black shorts which throw attention to her strong, gleaming legs and feet, she dances at shimmering speed; her low-heeled Mary-Jane shoes frame those fast feet; her triple-time steps and treble-roll steps, which resemble Bill Robinson’s steps and style, were never made more up-tempo and swinging.