Project Backboard is a 501(c)(3) organization whose mission is to renovate public basketball courts and install large scale works of art on the surface in order to strengthen communities, improve park safety, encourage multi-generational play, and inspire people to think more critically and creatively about their environment. 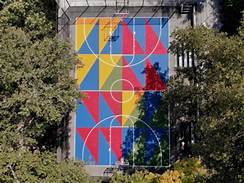 This basketball court mural is based on Faith Ringgold’s 1974 work, Windows of the Wedding #1: Woman. After exploring abstract shapes in the 1970s, Ringgold received acclaim for her narrative quilts created in in the 1980s. The basketball courts at St. Nicholas Park begin as an abstract pattern, but as hundreds, if not thousands, of stories play out across the courts surface it will be transformed into something of living narrative quilt. Ringgold was born in Harlem in 1930 and graduated from City College of New York (adjacent to the St. Nicholas Park).

This exhibition is presented by Project Backboard

The works from the Window of the Wedding series represent the imaginary future weddings of her daughters, and were hung together as an installation. The basketball courts at St. Nicholas Park begins as an abstract pattern but as hundreds, if not thousands of stories play out across the court’s surface it will be transformed into something of living narrative quilt.