Jean-Marie Guyaux, giving off a simultaneously nonchalant and sharp air in his black clothing, spent the first half hour describing the companies that hired him, the advertising agencies that steered his work and the process of selling and promoting his work. The recorder rolled and I mourned the waste of my battery. Where was the artistry, the vision, the depth? Then, he surprised me. Jean-Marie pulled out his work and, as he pointed to the delicate ripples in the rain, the “patterns which give the picture a totally different dimension!” the artist, at long last, emerged.

“Personal photography” as Jean-Marie calls this new series, is a new field for a man who has worked in commercial photography most of his life. “I have no problem with [commercial photography],” he says, but he has found an audience and perhaps, with that, an affinity for this new branch of photography. “I was totally surprised. Artists gave very positive responses… Maybe I have something!” he says and laughs. A casual collection of torn posters, wayward umbrellas and junkyard cars gathered from years of subway travels have finally been exposed to the public eye. What originally started as a hobby is evolving into a long-term profession of meandering through stormy parks and impersonating paparazzi sans car crashes. The new series, called “Crash”, “Crushed” and “Ripped” form a stark contrast to his previous work of fashion and thespian icons. 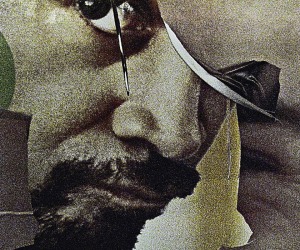 A finished photo “has to jump out at you!” he said and “move people in one form or another.” The paltry remains of ripped posters, the headlights decrepitly dangling off the hood, and the dark umbrella sinking into an even darker puddle emanate feelings of loss, loneliness and anger. “I think America is a violent society and my images reflect that,” he said, but while the posters, umbrellas, and cars make valid social critiques, their strong public appeal may be traced to a rawer emotional basis. The umbrella, an object used for protection, carelessly tossed into the storm and lying splayed open like some dead animal evokes a deep sadness. How sad to be broken, forgotten, and thrown away…