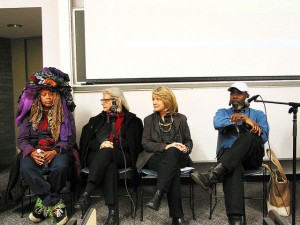 Join the West Harlem Art Fund, New York Restoration Project and the artists that created the Play(LABS) exhibition for an evening of fun and discussion. The talk will be held at Harlem Garage, the 1st co-working space uptown located on 118th Street. Moderating the talk will be Neal Ludveg and Savona Bailey-McClain. Artist in the Play(LABS) public art series are: Tomo Mori, Dianne Smith, Badder Israel and Iliana Emilia Garcia. East Harlem, NY… Play (LABS) is a group exhibition that will link four East Harlem community gardens together and explore the importance of play for both children and adults. This public art series will begin in mid-October and last up to Thanksgiving. Functional play objects on a large scale will be fabricated specifically for each garden and programs will also be scheduled to engage local residents and visitors.

Executive Director & Co-Founder, Harlem Arts Festival
NEAL LUDEVIG is a music industry professional with extensive experience in nearly every facet of the music industry. Neal was most recently a Music Agent and Artist Coordinator at Addeo Music International (AMI) booking agency in New York City. He is responsible for managing and organizing (inter)national tours for a number of internationally acclaimed artists, and with working with a number of performing arts organizations and festivals around the world. Neal also works as the Harlem representative for Make Music NY, which brings free music each year in every borough of Manhattan. Neal holds a B.A. from Brandeis University in Sociology and American Studies, speaks conversational Russian and French, and plays and records the piano, guitar, bass, flute, and saxophone. He also enjoys the traveling, the outdoors, dancing, teaching and playing tennis.

Executive Director & Chief Curator, West Harlem Art Fund
SAVONA BAILEY-McCLAIN currently lives and works in New York City. She is an independent curator, producer and preservation advocate. The range of McClain’s practice has included sculpture, drawings, performance, sound, and mixed media. McClain is the Executive Director and Chief Curator for The West Harlem Art Fund, Inc. a fifteen year old public art organization and curatorial collective serving neighborhoods around the City. Her public art installations have been seen in the New York Times, Art Daily, Artnet Magazine, Los Angeles Times, DNAinfo, Huffington Post among others. McClain strives for a soulful, meaningful connection with the public and the “arts”. It simply has to be approachable as far as she is concerned. McClain has installed at Times Square, DUMBO, Soho, NoLita, Williamsburg, Governors Island, Queens, Greater Harlem (East, Central and West), Chelsea, the Bronx this spring and East Harlem this fall. McClain has a liberal arts degree from the University of Pittsburgh.

BADDER ISRAEL “Art Kartel” was born and raised in Puebla, Mexico. Israel was born into Mexico’s graffiti scene. His dad is the legendary old-school graffiti artist, Mosh. Israel began to graffiti professionally when he was 15 years old. His dad used to own a graffiti store where Israel helped out. His dad was also the one that coordinated the Graffiti Expo in Mexico where the elite of the elite would show up and put it down for their crew and country that they were representing. Later on, the artist name Badder was given to Israel after paying his dues in the street scene. Badder is now 27 years old and lives in Brooklyn, New York. Badder’s historical graffiti pieces have given him a name in New York since his roots are represented through his artwork. Since his move to New York, Badder has mastered many different skills including air brushing and tattooing. Badder is tattooing more than ever but still has a crew based out of Brooklyn, New York.

DIANNE SMITH is an abstract painter, sculptor, and installation artist. Her work has been exhibited in solo and group exhibitions in New York City’s Soho and Chelsea art districts as well as, numerous galleries and institutions throughout the United States. She is an educator in the field of Aesthetic Education at Lincoln Center Institute (LCI), which is part of New York City’s Lincoln Center for the Performing Arts. Since the invitation to join the Institute over six years ago she has taught k-12 in public schools throughout the Tri-State area. Her work as a teaching artist also extends to under graduate and graduate courses in various colleges and universities such as: Lehman College, Brooklyn College, Columbia University Teachers College, City College, and St. John’s University. Dianne is a Bronx native of Belizean descent. She attended LaGuardia High School of Music and Art, the Otis Parsons School of Design and the Fashion Institute of Technology. Smith recently completed her MFA at Transart Institute in Berlin. She currently lives and works in Harlem, NY.

ILIANA EMILIA GARCIA was born and raised in Santo Domingo, Dominican Republic, Her love of the arts blossomed at an early age. Garcia’s formal schooling started at Altos de Chavon, an institution affiliated with Parsons School of Design, where she studied graphic design. Awarded the Ruth Vanderpool Scholarship, she then moved to New York City to continue her studies at Parsons. She graduated from Parsons in 1991 with a BFA in communication design. Her works have been exhibited throughout the United States and abroad, including the permanent collection of El Museo del Barrio in NYC. Currently she lives and works in Brooklyn with her husband and daughter.

TOMO MORI was born in the countryside of Osaka, Japan. She studied fundamental drawing and painting intensively at Tokyo Metropolitan High School for Music and Fine Arts. In 1991, she entered the Atlanta College of Art to pursue studying contemporary art in the U.S. Since 2010, she has been working almost exclusively in a meticulous, hands-on-process of canvas-on-canvas collage. Her work has been exhibited in New York, Atlanta and Tokyo, including Rogue Space Chelsea, Chashama, Dwyer Center, Canvas Paper Stone Gallery, Renaissance Fine Art, Knox Gallery, Bill Lowe Gallery and Tokyo Metropolitan Museum. Tomo currently lives in West Harlem, as her creative base, and continues to explore the world from Bamako to Hanoi. She believes experiencing new culture adds more colors to her palette and her life.