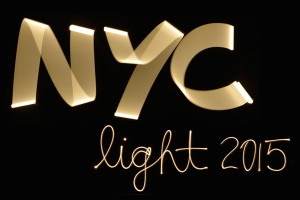 The Steering Committee for NYC Light 2015 is proud to present Vicki DaSilva’s light graffiti work as our official digital logo. The artist has been extremely supportive of our efforts to showcase the importance of this technology. The kick-off press event will be held in BLDG 92 at the Brooklyn Navy Yard on Friday, January 16, 2015.

Below is the artist’s bio.

VICKI DASILVA is a light graffiti and painting pioneer. Since 1980, she has been making single frame time exposure photographs, at night. Vicki is credited with the term “light graffiti” as well as being the first artist to make deliberate text light graffiti photographs. Vicki was influenced by video and performance artist Joan Jonas and then Richard Serra whom she worked with for ten years. Her work with Jonas and Serra, along with the birth of Hip Hop and the fusion of graffiti with fine art was extremely influential in her art.

Vicki, along with her husband Antonio, use 4 and 8-foot fluorescent bulbs attached to a complex system of tracks and pulleys to create her work. Using a camera that allows a ‘bulb’ setting for an extended time while on a tripod, the light source is directed at the camera and then the camera documents the movement of the light.