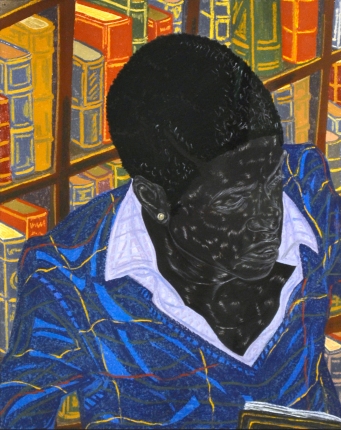 Born in Nigeria, Toyin Ojih Odutola is a contemporary artist who focuses on the sociopolitical construct of skin color through her multimedia drawings. Her work explores her personal journey of having been born in Nigeria then moving and assimilating into American culture in conservative Alabama. “I’m doing black on black on black, trying to make it as layered as possible in the deepness of the blackness to bring it out. I noticed the pen became this incredible tool. The black ballpoint [pen] ink on blackboard would become copper tone and I was like ‘wow, this isn’t even black at all!’ The black board was like this balancing platform for the ink to become something else. I instantly recognized this notion, of how we think something is a certain way and in reality it is something else…” Ojih Odutola says in an August 2013 interview about the show, My Country Has No Name in the International Review of African American Art.

When asked why the majority of her figures are black in a recent interview with the Village Voice, Ojih Odutola responded, “Of course they’re black figures because they’re drawn in black pen, but not all of the figures are of African American descent, or at least the reference isn’t. One of the things I like to play with is, “What is black?” Is it because I drew it? Is it because it looks black? Is it because you think the figure is black? Because a lot of it is just a filter, and the filters get more and more obstructed by whatever people think the image is about and not really what it is.”

The artist now lives and works in NYC 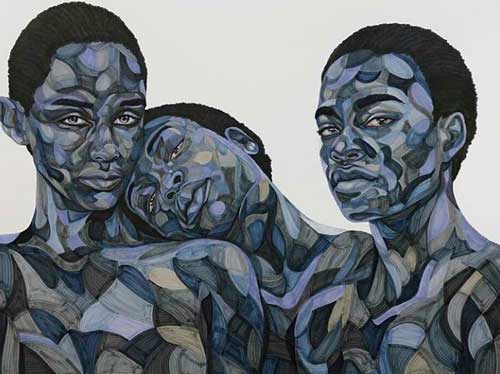