After the death of his father, T’Challa returns home to the African nation of Wakanda to take his rightful place as king. When a powerful enemy suddenly reappears, T’Challa’s mettle as king — and as Black Panther — gets tested when he’s drawn into a conflict that puts the fate of Wakanda and the entire world at risk. Faced with treachery and danger, the young king must rally his allies and release the full power of Black Panther to defeat his foes and secure the safety of his people.

HISTORY OF THE BLACK PANTHER

Black Panther is a fictional superhero appearing in American Comic Book published by Marvel Comics. The character was created by writer-editor Stan Lee and writer-artist Jack Kirby, first appearing in Fantastic Four #52 (July 1966) in the Silver Age of Comic Books. The series depicts the Black Panther as T’Challa, king and protector of the fictional African nation ofWakanda. Along with possessing enhanced abilities achieved through ancient Wakandan ritual, T’Challa also relies on his genius intellect, rigorous physical training, martial arts skill, access to advanced technologies and wealth to combat his enemies and foes. 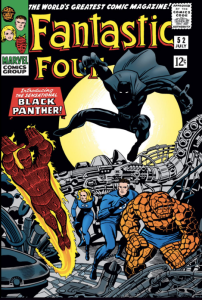 Black Panther ( read the Fantastic Four edition) is the first superhero of African descent in mainstream American comics, having debuted years before early African American superheroes such as Marvel Comics’ the Falcon (1969) and Luke Cage (1972) or DC Comics’ John Stewart in the role of Green Lantern (1971). The Black Panther storyline which ran through thirteen issues of the Jungle Action series (numbers six through eighteen) is considered to be Marvel Comics’ first graphic novel. In one storyline the Black Panther mantle is handled by Kasper Cole, a multiracial New York City police officer. Beginning as an impersonator, Cole would later take on the moniker of White Tiger and become an ally to T’Challa. The role of Black Panther and leadership of Wakanda is also given to T’Challa’s sister Shuri for a time when he is left recovering from critical injuries.