Kevin Snipes was born in Philadelphia, but grew up mostly in Cleveland, Ohio. He received a B.F.A. in ceramics and drawing from the Cleveland Institute of Art in 1994. After leaving grad school at the University of Florida in 2003 Kevin has led a seemingly nomadic artistic life, constantly making making no matter where he is.

Kevin has participated in several artist residency programs, including the Clay Studio, in Philadelphia and Watershed Center for Ceramic Arts, in New Castle, Maine and received a Taunt Fellowship from the Archie Bray Foundation in Montana 2008. Exhibiting both nationally and internationally, including a recent solo exhibition at the Society of Arts and Craft, Boston; Akar, Iowa City and Duane Reed Gallery in St. Louis. Kevin has exhibited as far away as Jingdezhen, China. Kevin combines his love of constructing unconventional pottery with an obsessive need to draw on everything that he produces, creating a uniquely dynamic body of work. He currently resides in Pittsburgh, PA.

Dora De Larios (1933-January 28, 2018) was an American ceramist and sculptor working in Los Angeles. She was known for her work’s clean lines and distinctive glazes, as well as for her line of tableware created under her family-run company Irving Place Studio. Also a muralist working with tile, De Larios was noted for her style, which reflects mythological and pan-cultural themes.

Whether in intimate ceramic pieces or massive mixed-media commissions, De Larios strives to harmonize the animal and the spiritual, the earthly with the divine. Her artistic world is populated by mythological creatures and goddesses at once whimsical and fierece. The contrast between opposing forces is evident in her more abstract pieces as well, as when spherical mandalas are enclosed by squares.

It is no doubt De Larios’ ability to translate universal human dilemmas into mystical and transformative works of art that accounts for her international appeal. She is today one of America’s leading clay artists, with an impressive list of accomplishments ranging from place settings for the White House to a grand cement wall sculpture in Nagoya, Japan.

Though her art shows definite influences of her Mexican heritage, those who have been collecting her work for decades are just as likely to describe the figurative works as Asian, African or Greek. Her studies of world religions and ancient art at the University of Southern California, her travels around the world and her upbringing in ethnically diverse Los Angeles account for the unique cross-cultural influences on her artwork.

David R. MacDonald was born in 1945 in Hackensack, New Jersey, the third oldest of nine children. He graduated from Hackensack High School in 1963 and was awarded an athletic scholarship to Hampton Univeristy (Hampton, Virginia) where he majored in art education. While there he was greatly inspired by noted African American ceramic artist Joseph W. Gilliard.

During his studies at Hampton his work became influenced by the political and social issues of the time (the Civil Rights Movement). After graduating, he was awarded a graduate fellowship at the University of Michigan where he studied with John Stephenson and noted African American ceramist Robert Stull. During this time, his work continued to focus on social and political commentary and expand technically.

After receiving his Master of Fine Arts degree he joined the faculty of the School of Art and Design at Syracuse University. During the late 1970s and early 1980s, MacDonald’s work received most of its creative inspiration from his investigation of his African heritage. Looking at a variety of design sources in the vast creative tradition of the African continent, MacDonald draws much of his inspiration from the myriad examples of surface decoration that manifests itself in the many ethnic groups of sub-Saharan Africa (as pottery decoration, textiles, body decoration, and architectural decoration). MacDonald’s work spans the complete spectrum of ceramic forms of a utilitarian nature. 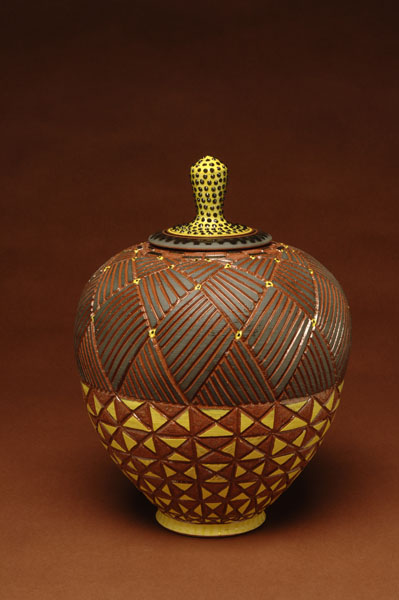