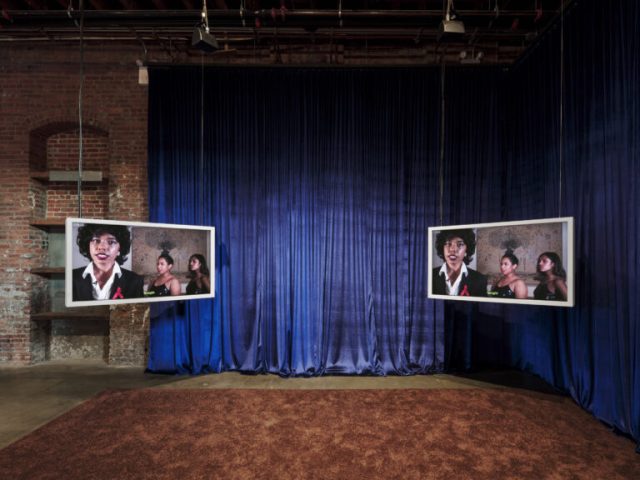 The title, Brand New Heavies, is inspired by the name of an acid jazz and funk group formed in 1985 in Ealing West London. Acid jazz is a musical genre that combines elements of jazz, soul, funk, and disco that originated in London clubs. Deux Femmes Noires chose this title for its apt connection to the artists represented, who could all be considered “New Heavies” in the artworld. Each artist in Brand New Heavies has a distinct ability to utilize disparate sources, materials, and media to create multi-layered narratives that offer a more complex understanding of our relationship to history, identity, politics, and place. Engaging in multifaceted explorations of the self, DeVille, Simmons, and Uddoh examine these ideas closely, then render them on a colossal scale.

Brand New Heavies is Chevremont and Thomas’s second curatorial project together; the first, The Aesthetics of Matter,featured young, rising talent and premiered at the Volta New York Art Fair. For this exhibition, Deux Femmes Noires wanted to work with three ambitious artists—DeVille, Simmons, and Uddoh—who were selected for their distinct visionary practices, individual ability to tackle monumental scales (both conceptual and physical), and their rigorous investigation into the politics around the Black body. Deux Femme Noires knew these artists would embrace the opportunity Pioneer Works offers as a community-engaged, artist-focused institution with a distinct physical space. 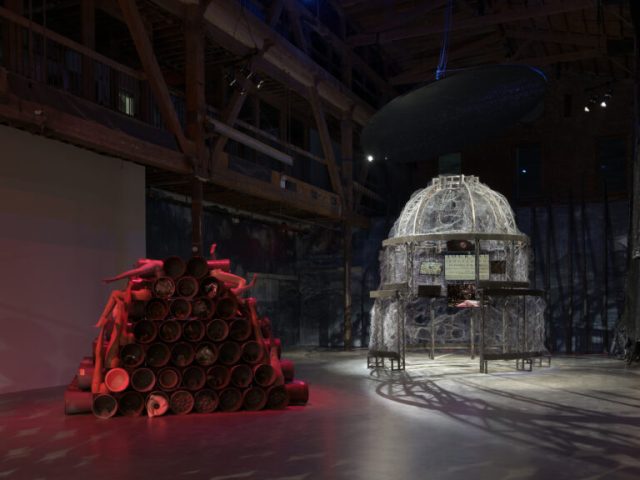 Abigail DeVille is best-known for her large-scale sculptural installations that engage the history of violence against marginalized people and places. For Brand New Heavies, DeVille has created The Observatory, a monumental installation composed of steel trussing, chicken wire, and charred wood that takes aim at Washington, D.C.’s Capitol Building. A scaled-down version of the Capitol dome, The Observatory will house a complex network of miniature video portals that combine still photography, video shorts, home videos, and archival footage of significant historical sites, including the Historic Stagville Plantation in North Carolina, Sullivan Island in South Carolina, and the Combahee River. Above the 20-foot structure, charred liberty poles hang inverted and suspended from the ceiling. This reversal of a common symbol of freedom (dating back to the colonization of the Americas) suggests an alternative history to the one commonly perpetuated, and the videos inside the dome similarly construct a parallel account of those who have been fighting for freedom since the 16th century.

Xaviera Simmons is known for work that encompasses photography, performance, video, sound, sculpture, and installation. Rooted in experience, memory, abstraction, and history, her practice is fundamentally concerned with the complex relationship between language, landscape, and subjectivity. For Brand New Heavies, Simmons will construct a new, immersive sculptural work, Even in the variations, the division of pleasures help situate us to advocate for, that is grounded in the physical, visceral, and earthly. Comprised of molded, earth-based spheres stacked one atop another in a concentric formation, Simmons’s installation projects physicality and sensual tactility. The towering sculpture contains a video that presents two binaries: that of intimacy and eroticism, and what the artist describes as the more banal “matter of fact” data and statistics found within American political discourse. The environment synthesizes and simultaneously engages the “classical” and the modern, creating a balance between human lust and desire and intellectual information-based research.

Combining performance, ceramics, video, and sound, Rosa-Johan Uddoh explores the infatuation with places, objects, and celebrities that pervades British popular culture and the resulting/lasting effect it has on self-formation. For Brand New Heavies, Uddoh will present a new multimedia environment that features Black Poirot, a video and sound installation. A play on Agatha Christie’s crime novel Murder on the Orient Express (1934) and its protagonist Hercule Poirot, the 20-minute video is a “recasting” of the novel. The work follows a script narrated by the artist that investigates a forgotten crime aboard the fictional Oriental-Other Express. Uddoh combines archival footage with visually sparse scenes as an anti-colonial gesture that prioritizes the auditory experience over pure visual seduction. Uddoh will also present videos from her three-part Performing Whiteness series, which explores the labor of performance by Black and Brown women.

An accessible version of Black Poirot by Rosa-Johan Uddoh, suitable for a deaf and hard of hearing audience, is also available at the front desk of Pioneer Works.

The Major Sponsors for Brand New Heavies are the Ford Foundation and Gucci.