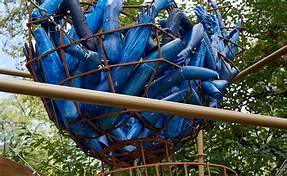 Light of Freedom is a thirteen-foot-tall reference to the torch and flame of the Statue of Liberty. The statue’s hand and torch were on view in Madison Square Park from 1876 to 1882 as a nineteenth-century-style marketing event intended to rouse excitement and gather funds to complete the statue in France before it was installed in New York Harbor in 1886. In a sense, the artist is conjuring the ghost of Lady Liberty and appealing to her majestic presence and symbolic openness to meet this moment.

DeVille filled the torch and flame with a reused well-worn bell and the arms of mannequins. The artist typically mines untold histories in public space for the subject matter in her work. In this piece, she conjoins significant crossroads in African American history in New York for a sculpture that is inspiring and introspective. DeVille recognizes and hallows the earliest enslaved Africans who were brought to New Amsterdam in 1626, and she critiques the promise of American liberty and justice for all with a focus on today’s Black Lives Matter movement. Abigail DeVille is an artist who is also a citizen archaeologist. She excavates the strata of civilization to unearth histories, artifacts, and cultures, and brings those to her work.

Light of Freedom carried cogent symbols. The artist found a schoolhouse bell—an instrument that heralds freedom—which, though rusted and weary, expresses a timeworn beauty. She collected mannequin arms, limbs that beseech the viewer, and inserted them into a metal arma- ture that resembles the torch of the Statue of Liberty, then encased all the materials in a golden scaffold that meta- phorically prevents access, but possesses luminosity. The scaffold also recalls a work site, an ongoing and insistent image in the urban landscape. In Light of Freedom, DeVille focuses on a central point of the oration that statesman and abolitionist leader Frederick Douglass delivered in Canandaigua, New York, on August 4, 1857, when he stated: “If there is no struggle there is no progress.”

Above text comes from the Madison Square Park Conservancy and the artist Abigail Deville.

This installation was available from October 2020 throught January 2021. Given that the nation is grappling with voter suppression laws in several states and that the formation of a bipartisan commission to study the insurrection this past January is being stalled, we should examine what freedom and our democracy really means to us.