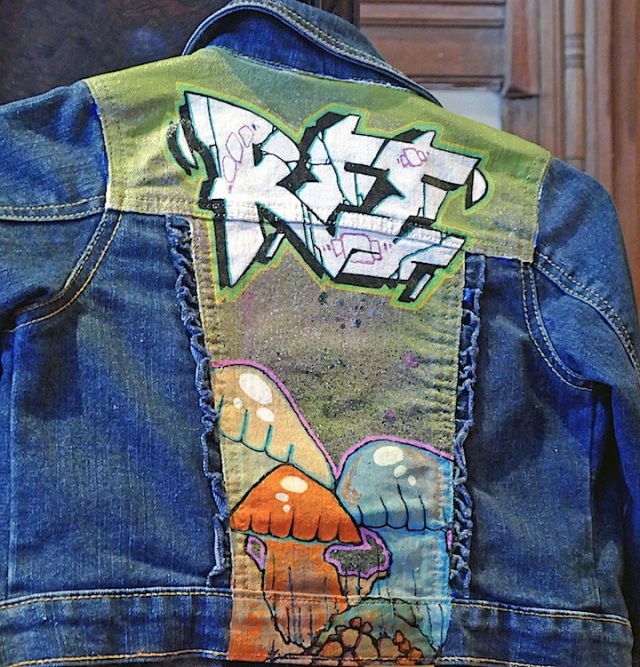 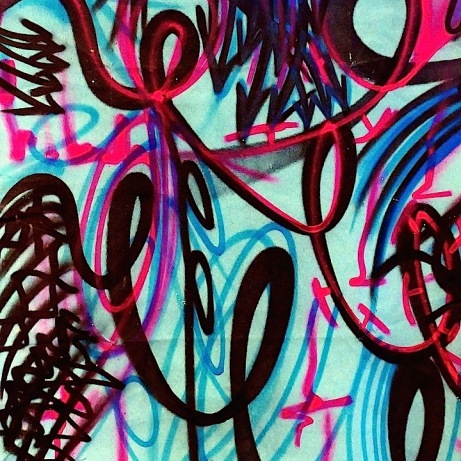 The West Harlem Art Fund transformed the main floor of a townhouse on Lenox Avenue and showcased street art, ceramics, glass, paintings and installations. A tad grueling but it was for Armory 2016. The goal was to bring more edgy, hip and contemporary art to Harlem. Below are the bios for the street artists.

“Lady K Fever” Kathleena Howie is a Canadian born inter-disciplinary artist based New York City since 2004. Internationally renowned for her large-scale graffiti/street art installations, she experiments in painting, installation, conceptualism, performance, and writing.   A professional trained dancer, she transitioned into performance and street art while studying theatre, film and directing at Gastown Actor’s Studio in Vancouver 1994-1999.

A sought out educator, Lady K has worked with the Museum of Art and Design, Studio Museum in Harlem, Queens Museum, Guggenheim, El Museo Del Barrio, The Laundromat Project, and a recipient of Bronx Council on the Arts; Arts in Education Grant. Currently, she works with The Bronx Museum, Sugar Hill Children’s Museum, and Hush Hip Hop Tours.

BG 183 – Tats Cru- BG 183 was born and raised in the South Bronx. One of the founding members of the legendary TATS Cru: The Mural Kings. Defining his style as the Art of Letters. He has painted graffiti murals and exhibited artwork around the world for over thirty years. BG has collaborated on corporate campaigns with McDonalds, Coca Cola, MTV and created colorful advertisements for Jennifer Lopez, Ice-T, Missy Elliot and Fat Joe.

His work has been exhibited in Museums and Galleries throughout the United States and internationally including The Smithsonian Museum, The Bronx Museum, BOX Gallery Guangzhou – China, Casa de Cultura- Mexico, La Jardin Rouge – Morocco, and featured in various publications: The New York Times, Vibe magazine, Chicago Tribune and books: Spray can Art, The Art of Getting Up, Broken Windows and Graffiti World. BG is currently working on projects with the NYC board of Education and creating new works for upcoming gallery exhibitions.

Brim Fuentes, is the founding member of graffiti crew TATS CRU, and was born in the South Bronx, New York City. Brim was fortunate enough to start writing graffiti in one of the most important periods of graffiti history. He began bombing and hitting New York City Subway trains, in the late 1970s, all the way through to the mid-1980s. After the trains were cleaned in 1989 he and the rest of TATS CRU took to the streets and began bombing and creating street art all over the city.

Brim’s friendship to Afrika Bambaataa, and the almighty Universal Zulu Nation led to Brim being featured in one of the most important videos in hip-hop culture, “Afrika Bambaataa – Renegades of Funk”,

Brim was also featured in many other important documentaries and movies about Hip-Hop and graffiti culture from that time period including Dick Fontaine’s 1987 documentary “Bombin” where he was introduced to fellow British graffiti artists Goldie and 3D (who later went on to form Massive Attack) Brim became Goldie’s artistic mentor, New York was the place that lifted his horizons, and America was where he would later become “Goldie”

Brim was documented as the first graffiti artist to come to the UK and appeared on many TV stations and newspapers including the front page of the Daily Telegraph discussing this graffiti culture. Upon this media frenzy Brim was invited to lecture at Oxford University and was asked personally by Michael Winner to create the backdrops in his film Death Wish 3 which starred Charles Bronson.

The prequel to this film was BBC’S 1984 Beat This: A Hip-Hop History The film included footage from DJ Kool Herc’s original parties, The Cold Crush Brothers, Jazzy Jay, Soul Sonic Force and Afrika Bambaataa. The film featured Brim’s take on graffiti in New York. The film was one of the first documentaries about Hip-Hop.

Brim would go on to form a clothing line FJ560 with then famous rapper and friend Fat Joe The flagship store was located in the Bronx, New York City. Fat Joe, The Terror Squad and Big Pun can be seen in many videos wearing FJ560. Fat Joe would paint with TATS CRU before he was a famous rapper.

Brim and TATS CRU would be heavily involved with advertisement for Fat Joe and created painted billboards across the city promoting his album releases. By becoming such an iconic figure in the world of art he received a mention alongside other TATS CRU members in the KRS-One track “Out For Fame”. On the passing of Big Pun, TATS CRU painted the memorial wall that is visited daily; Brim is currently working on the Big Pun statue project that will create a 3D memorial wall in honor of the late Big Pun

Boom is a German-born American Multi-Media Artist. She currently lives in New York City, where she loves to roams the streets, finding inspiration for her eye-popping art and multi- dimensional sound. Born Lisa Maria Romans, (pronounced Leeza), in the Bavarian Alps, she fell in love with creative expression at a young age. Attending her first two years of high school in Storm Lake, Iowa, where a bit culture shocked, she dived into Art, winning a Nation Scholastics Silver Key Award, in Washington, D.C, She returned to Germany to finish her schooling, before returning to the US, at age eighteen. She has been exhibiting her paintings and murals all across Europe and the United States, since the age of thirteen. After moving to Brooklyn in 2004, she met Producer Fake Money’s Drew C. her first song was recorded. She’s been recording with various Artists since.

A socially conscious world traveler, she draws inspiration from her experiences living in both Europe and the US and traveling to far destinations such as Botswana, where she worked with orphans at the S.O.S Children’s Village in Tlokweng, Gaborone.

Past collaborators and clients include various hip-hop artists, producers, actors, and photographers

including Theo Rossi, the Bodega Pimps, Jeru the Damaja, The Mind Lense, MessQueen NYC, and No Way Josie.

Karlos Cárcamo has a BFA from the School of Visual Arts and an MFA from Hunter College, both in New York. He has exhibited extensively including at the Brooklyn Museum; the Bronx Museum of the Arts; MoMA PS1, the Queens Museum, El Museo del Barrio, Cuchifritos Gallery + Project Space, White Box and Artists Space, all NY; Jersey City Museum and Aljira Center of Contemporary Art, both NJ; and Museo de Arte de El Salvador. He was awarded a residency at the Lower Eastside Printshop in 2009 and was part of the Bronx Museum’s Artist in the Marketplace Program in 2000. His work has been reviewed in Art in America, The New York Times, and the Village Voice, among other publications. Karlos Cárcamo is represented by Hionas Gallery in New York City.

Born and raised in Harlem, New York City. Marthalicia has many art disciplines such as drawing, sculpting, painting and creating large murals and so forth.

Current area of art dialogue is based on educating the harmony between animals and humans, in many unique presentations.

Encouraged by faith to pursue the art form, Marthalicia entered La Guardia High School of Performance and the Arts, and upon graduating high school, she enlisted in the Army National Guard.

She enrolled in S.U.N.Y. New Paltz for a B.A. in Fine Arts. 2005 gave birth to her son, while in service, and building art resume to further in her new art journey Live Art Performance.

Today, Marthalicia has broaden her art experiences to many difference avenues in art venues, and oppourtunites where she builds with her community and others

In her painting, Robotic Leftovers of Chaotic Love Wars, Wood shows us the smoldering aftermath of some exotic explosion with fires, dirt, and grime. There may even be some birds flying out of an elusive tavern of hell. She straps us in with cutting geometric lines and then she lets us fall into a dark smoldering pit. Wood uses a number of medias such as acrylic, gouache, ink, pastel, charcoal, graphite, colored pencils, and marker, which creates a world of unique character and charm.

Woods’ sculptures are like mythical creatures or submarine life forms with clear geometries and free form appendages in equal number. Created from objects the artist discovered in the streets of Berlin, her part time home, the work is built from the PVC legacies of our civilization. – James Horner, Manhattan Fine Arts Examiner

SIENIDE is a multi-layered Artquarian who celebrates his birthday with Charles Darwin and Abraham Lincoln. Hailing from the Bronx, NY. His life and art is inspired by life and art.

Dozens of Sien’s masterfully illustrated murals are scattered throughout the five boros of NYC. His public works engage a younger generation of street art enthusiasts with abstract compositions and mood altering color. The reactions from the community are a main source of motivation to push his work ever forward.

REE is a graffiti street artist from the Dominican Republic and grew up in the Bronx. As an old school graffiti writer he was important as both a stylist and whole-car artist. He was the most visible member of the MTA crew as well as its president. Ree has exhibited around the globe in galleries and museums since the 1980’s.

Hip-Hop dancer/choreographer Ana “Rokafella” Garcia began street performing with such crews such as The Transformers, The Breeze Team, and the New York City Float Committee. In ’94 she ran into Kwikstep who urged her to audition for GhettOriginal- a Hip-Hop dance company. She was cast and became further exposed to the “old school” dance technique. After experiencing international appreciation for Hip-Hop, she decided to offer classes back home to prevent it’s fading away. She has taught workshops at NYU and Howard as well as neighborhood high schools and community centers. The nonprofit company she co-founded with her husband, “Full Circle Prod”, serves the community with educational performances and multimedia urban-themed performances. They presented “Soular Power’d” on Broadway’s New Victory Theater, which received rave reviews, and was their Hip-Hop theater directorial debut. She is presently producing a documentary based on the challenging lifestyles of female break-dancers featuring b-girls from all over the world. She represents the positive image of a woman confident in both her Puerto Rican and Hip-Hop cultures. She believes this culture was born to help urban youth get through the ups and downs of life with something to hold on to.