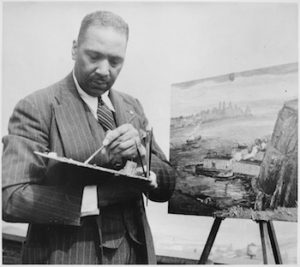 Palmer Hayden’s birth was on November 9th 1890. He was an African American painter whose work became known during the Harlem Renaissance.

Born Peyton Cole Hedgeman in Wide Water, Virginia, he was a prolific artist of his era. He depicted African American life, painting in both oils and watercolors.

As a young man, Hayden studied at the Cooper Union in New York City and also practiced independent studies at Boothbay Art Colony in Maine. He created one of his first famous pieces in 1926, a still life called “Fetiche et Fleurs,” which won the esteemed Harmon Foundation’s Gold Award, prompting his patrons to support him so he could live and study in France.Over the next five years in Paris, Hayden was very productive, trying to capture elements of Parisian society.

On his return to America, Hayden began working for the United States government. He worked for the U.S. Treasury Art Project as well as the Depression-era government-funded Works Progress Administration (WPA).

Hayden took his inspiration from the environment around him, focusing on the African American experience. He tried to capture both rural life in the South, as well as urban backgrounds in New York City. Many of these urban paintings were centered in Harlem. The inspiration for “The Janitor Who Paints” came from Cloyde Boykin, a friend of Palmer’s. Boykin was also a painter who supported himself through janitorial work. Hayden once said, “I painted it because no one called Cloyde a painter; they called him a janitor.” Many people consider this painting to be an expression of the tough times Palmer was having.

Palmer Hayden created a painting series on African-American folk hero John Henry. This series consisted of 12 works and took 10 years to complete. John Henry was said to be a strong, heroic man who used a hammer to create railroads and tunnel through mountains.

His works had other exhibitions, including at the New Jersey State Museum and the Galerie Bernheim-Jeune.

Palmer Hayden was a great artist who made many visual contributions to this country. He died on February 18, 1973.

In a 1969 interview he described The Janitor Who Paints, created around 1930, as “a sort of protest painting” of his own economic and social standing as well as that of his fellow African Americans. Hayden said his friend Cloyd Boykin, an artist who, like Hayden, had supported himself as a janitor, inspired this piece: “I painted it because no one called Boykin the artist. They called him the janitor.” Details within the cramped apartment—the duster and the trashcan, for example—point to the janitor’s profession; the figure’s dapper clothes and beret, much like those Hayden himself wore, point to his artistic pursuits. Hayden’s use of perspective was informed by modern art practices, which favored abstraction and simplified forms. He originally exaggerated the figure’s facial features, which many of his contemporaries criticized as African American caricatures, but later altered the painting. He maintained the janitor as the protagonist as it represented larger civil rights issues within the African American community.

The painting “Fétiche et Fleurs” (Fetish and Flowers) is an iconic still life showing a Fang reliquary head from Gabon placed on top of Kuba raffia cloth from Central Africa.

It captures a turning point in the expression of African American identity that begins to incorporate specific references to African cultural roots. Fétiche et Fleurs won the Rockefeller prize at the 1933 Harmon Foundation exhibit in New York.

“Fétiche et Fleurs” was completed when Hayden returned to New York City after living in Paris from 1927 to 1932. Hayden’s time in Paris allowed him to view himself as an American as it can only be done outside America.

His Paris years gave him a chance to reflect specifically on what it meant to be African American and expanded the range of his subjects and themes with an emphasis on the narrative aspects.

When he returned to America, he would become an American scene painter of the Black experience.

Midsummer Night in Harlem was meant to embody the community in Harlem.  Palmer Hayden portrayed a high-energy community sitting outside of their houses to cool off on a hot summer night. This painting shows the energy and positive attitude through vibrant colors and the expressions of the people.  They all have smiles and nice “Sunday church” outfits on.  It is fair to assume that the people had just come from church because Palmer Hayden has people still lingering out of the church in the background.  Midsummer Night in Harlem was another one of Palmer Hayden’s paintings that got a negative reaction from some black Americans because of how interpreted their physical features.  The people in this photo once again had features that were comparable to the minstrel characters.  They all have very dark skin, big white eyes, and big mouths.

It was to be part of a series depicting black soldiers from the early days of World War I through World War II, when separate black regiments were abolished.

The series on black solders was commissioned by the Creative Artists Public Service Program Foundation of New York. 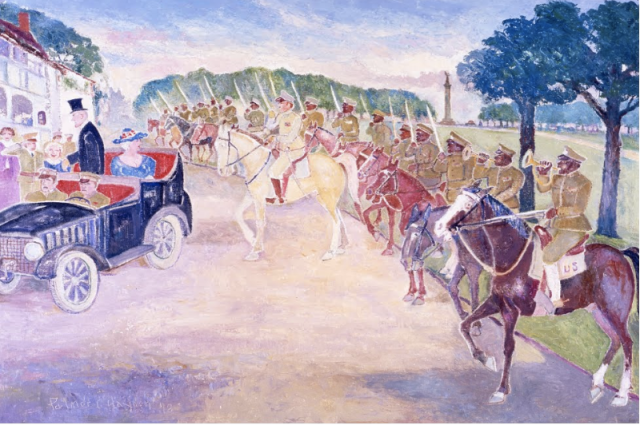