Nick Cave (b. 1959, Fulton, Missouri) has become internationally celebrated for his elaborate sculpture and found-object installations, including his iconic Soundsuits, which blend sculpture, fashion, and social performance. Traveling from the Museum of Contemporary Art Chicago, Nick Cave: Forothermore is a survey exhibition covering the entire breadth of his career. Featuring sculpture, installation, video, and rarely seen early works, the show examines Cave’s multivalent creative practice as an artist, performer, fashion designer, educator, and activist. The subtitle, “Forothermore,” is a new word that reflects the artist’s lifelong commitment to providing space for those who feel marginalized by dominant society and culture—especially working-class communities and queer people of color. The exhibition both highlights the development of Cave’s singular art practice, which uniquely combines the visual and the performing arts, and interrogates the promises, fulfilled or broken, that the late 20th and early 21st centuries offered to the “other.” 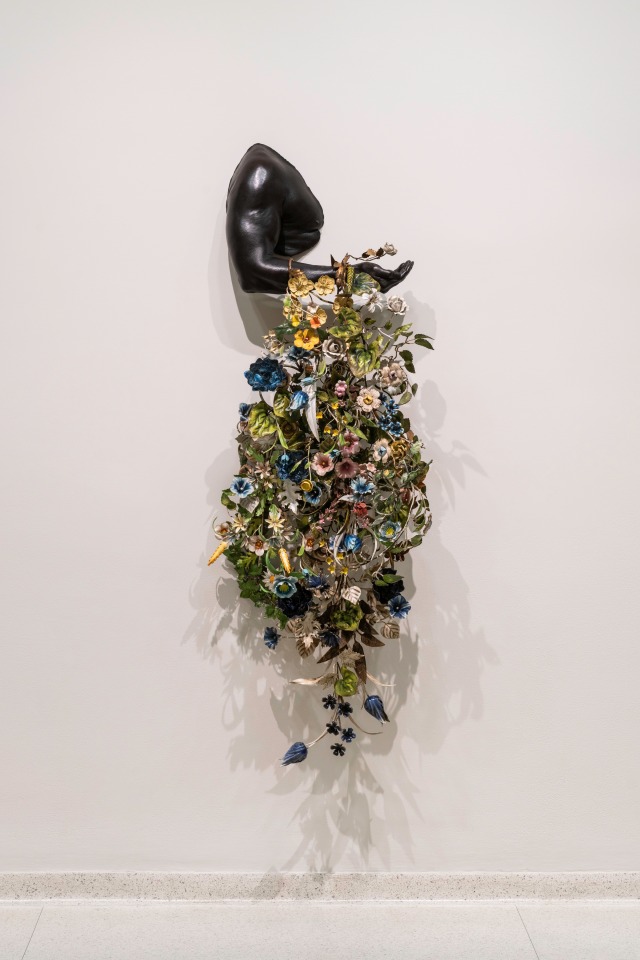 Installed in the museum’s tower galleries, the survey’s thematic sections are titled “What It Was,” “What It Is,” and “What It Shall Be,” inspired by an old African American greeting. The exhibition unfolds as a tripartite story, with the three chapters looking into the past, present, and future of Cave’s practice. “What It Was” explores early works that honor the artist’s creative and social foundations within his family and beyond. Living and working in Chicago, Cave has been deeply influenced by the psychedelic pageants of musician George Clinton’s Parliament-Funkadelic collective, which draws on Surrealism, science fiction, and outlandish fashion. Yet he is equally inspired by the design philosophy of the Bauhaus movement, the creative frugality of his family, and the visceral hedonism of the Chicago House music scene. “What It Is” includes Cave’s work that addresses oppression, loss, mourning, and remembrance, but also joy and collective celebration. Finally, “What It Shall Be” gathers Cave’s recent incarnation of Soundsuits and monumentally scaled Tondo works, which exemplify his survival strategies amid injustice.

Nick Cave: Forothermore comprehensively investigates aspects of Cave’s career that are grounded in key aesthetic and ethical commitments: the artist primarily works with found objects and existing materials, making “something from nothing;” he creates objects that are as legible to art mavens as they are to those without a formal education; he collaborates with others embedding a sense of community within his projects; and he sensitively incorporates life-altering historical events into works that celebrate his creative roots while addressing ongoing injustice.

The exhibition is accompanied by a major, 320-page scholarly publication that is structured through the same thematic sections as the Guggenheim’s show: “What It Is,” “What It Was,” and “What It Shall Be”—each of which has a particular orientation toward time and key concepts in Cave’s oeuvre. “What It Is” explores Cave’s practice in dialogue with his lived experience as a queer Black man, showing how flashpoint political and cultural moments such as the beating of Rodney King and the ongoing Black Lives Matter uprisings shape his work. The focus of “What It Was” is Cave’s historical influences—from 1970s African American dance music and fashion to Chicago’s House music scene—which inspired Cave’s improvisatory and exuberant aesthetic. Finally, “What It Shall Be” highlights Cave’s creation of utopian alternatives as a strategy for survival in the face of oppression. Edited by Naomi Beckwith, the catalogue features a range of voices, including those of the artist and scholars who identify as people of color. Its contributors are Beckwith, Cave, Romi Crawford, Damita Jo Freeman, Malik Gaines, Nona Hendryx, Linda Johnson Rice, Meida Teresa McNeal, Antwaun Sargent, and Krista Thompson. The monograph, with over 100 pages of color illustrations, is published by the Museum of Contemporary Art Chicago and DelMonico Books in partnership with Artbook | D.A.P and is designed by Bob Faust.

In honor of Cave’s desire to give access to the broadest audience, the opening weekend of Nick Cave: Forothermore will be free to the public, thanks in part to support by the Ford Foundation.